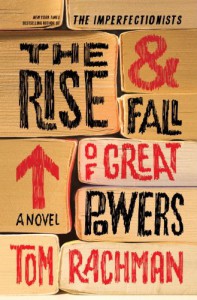 He raised his menu.

She consulted hers. "You don't like sweet-and-sour, do you."
"No," he confirmed. "I want food that can make up its mind."
I had a real difficult time connecting to the people, the story, this book -- but early on, I came upon this exchange between a man and a young girl -- Tooly, the protagonist.  That was enough to keep me going -- that, and Rachman's previous work, The Imperfectionists.
There are three storylines running through most of this book -- Tooly in 1988, Tooly in 1999, and Tooly in 2011. We see her as a child, still growing up; we see her all grown, but still figuring out her place in the world; and then as an established adult who's made a place in the world -- but she's still expecting/looking for the same one she tried to find in '99.
I spent most of the novel not really sure where any of these stories were going -- maybe 2/3 of it.  It didn't take me too terribly long to suss that out, so I decided to just enjoy the ride.  Which was so easy to do -- Tooly spent her life surrounded by a great menagerie of people -- Paul, a traveling computer technician working for various U.S. embassies in the 80s; Venn, a very charming con man; Humphrey, a Russian ex-pat and armchair intellectual; Fogg, a small-town bookseller; Sarah, a -- I don't know how to describe her, a histrionic woman with a short attention span (I guess, you eventually learn a lot more); a lout of a lawyer (whose name escapes me at the moment), who really isn't that much of a lout; and others.  It doesn't matter what they're talking about, you want to hear them talk, you want to see the interactions between these people and each other, or these people and Tooly.  The actual plot seems secondary as long as you get bits of conversation like this (like the above quotation, this is from 1988's story):

After a long pause, Tooly responded, "What are you like?"
"Me?  Well, I like bread with strawberry jam and believe raspberry jam ruins everything.  I think those who joke around with such matters are barbarians.  And I'm right about everything.  Except in the morning, when I'm wrong."Each chapter moves the various stories along, bit by bit -- and you get one or two strange encounters between Tooly and the other characters, you hear some strange theory about the way the world works, or how someone decides to do something, or some scheme to make sense of it all -- and I can't describe it for you better than that -- just give it a read.
Eventually, Rachman decides to let you see the pattern he's stitching -- and then it all comes together, each piece falling into place and while there was no way to see all of it coming, it all feels like it fits.  Not a "ohh, sure, I should've guessed that;" but "well, naturally -- there was really no other way for that to work, was there?"
For Fogg, Humphrey, and Tooly (and most of the other characters to some extent) books are a vital part of their existence -- or at least their way of thinking.  They're how they connect to the world, to people, to their experience.  The various ways the characters interact with, describe, and use books are just fascinating and are right up my alley.  Just for exposure to the various things this novel says about books, it's worth slogging through all the "what's going on?" of this read.
For example -- shortly after young Tooly first meets Humphrey, she asks to see his books (he always has stacks by him, but they keep changing, so she knows he has a stash somewhere).  He takes her to a closet bursting with books.

"Books," he said, "are like mushrooms.  They grow when you are not looking.  Books increase by rule of compound interest: one interest leads to another interest, and this compounds into third.  Next, you have so much interest there is no space in closet."

"At my house, we put clothes in the closets."
He sneered at this misapplication of furniture.  "But where you keep literature?"That compound interest line is a great one, isn't it?
The Rise & Fall of Great Power is a lovely little book I can't really talk about without over explaining.  Filled with great characters; plausible, yet implausible events: an embarrassment of riches when it comes to quotable lines;  interesting philosophies; stacks of books; and a dash of hope mixed a hint of existential despair.  More than worth your time.
Source: http://irresponsiblereader.com/2014/07/22/the-rise-fall-of-great-powers-by-tom-rachman
General Fiction Tom Rachman